We do not offer Ayahuasca at our facility. It is available if desired during your workshop at a different location with a different shaman.

Ayahuasca or Banisteriopsis Caapi (scientific denomination), also known as yagé or caapi, is an Amazonian plant that has been used for centuries and possibly millennia by the indigenous tribes of South American countries for healing and divination. It consists of a concoction normally brewed during 72 hours, which usually mixes the Ayahuasca vine itself and the Chacruna (Psychotria Viridis) leaves. These leaves contain the active hallucinogenic ingredient DMT, or Dimethyltryptamine, that is only allowed to become orally active by the alkaloids present in the vine. These alkaloids inhibit the action of the enzyme MAO (monoamine oxidase) present in the lining of our stomach, allowing the DMT to remain active in the body. How the indigenous peoples were able to reach this most perfect combination, out of the 250 000 species of known plants in the Amazon, remains a mystery to this day, although the ancients consistently say this knowledge was passed onto them by the spirit world or the plant itself. 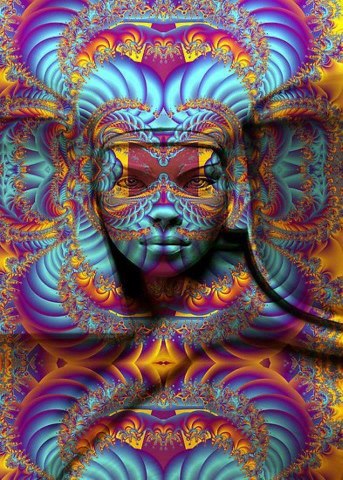 The brew usually has a chocolate brown color and an earthy taste, and is not considered pleasant, but the actual taste varies with the method of preparation and the location where it is consumed. When ingested, Ayahuasca often takes the participants through what is called ‘la purga’, which means purging to release and let go of things that do not serve them anymore. The most common types of purge are vomiting, yawning, crying or laughing. All of these are usually accompanied by a feeling of relieve, or a knowing that important healing is taking place. But this is not all that Ayahuasca does. The plant also commonly takes us on an incredible journey, often guiding us through other worlds, dimensions, or universes. The experience is usually very personal and tailored to the specific needs of each individual. When it is over, it is common for one to report a sense of personal and spiritual elevation, by experiencing breakthroughs and insights, receiving lessons, perceiving the meaning of life or their purpose in this world, or understanding that they are now free from previously existing physical or psychological conditions. The effects usually last for four to five hours, although this also tends to vary with the quality of the brew. A typical ceremony takes place in a Maloka or ceremonial round room, and is conducted by a shaman, whose task is to guide the participants through their experiences, and to assure their protection and wellbeing.

There are numerous accounts and scientific studies that confirm Ayahuasca as an incredible healer of all types of diseases and disorders, from mild and severe psychological conditions to Parkinson’s, Cancer and even the HIV virus. Although it is banned in most western countries due to the presence of DMT in the brew (the exception is when it is used in a context of a religious ceremony), in South America it is not only seen as a tool with amazing therapeutic properties but it is also considered a sacred healer and a master teacher. In Peru, it is also considered a national treasure. To this day, there have been no reports of any deaths caused by the ingestion of Ayahuasca. When taken under the right circumstances and in the presence of a competent shaman, Ayahuasca is completely safe and beneficial for the individual. It is a life changing experience that frees us from past and present physical, emotional and spiritual nightmares, and that permanently reshapes the way we see ourselves and the world around us.